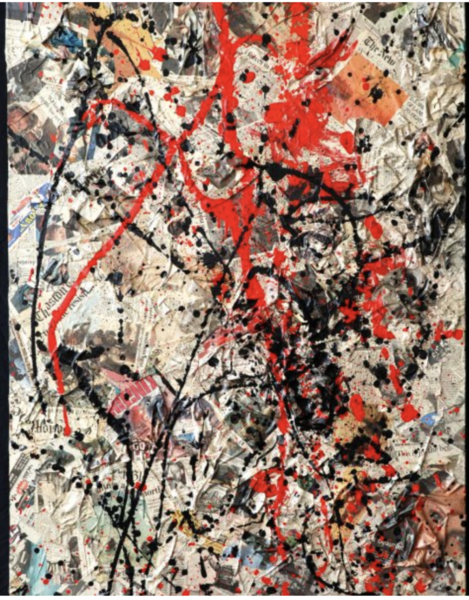 The work of British artist Michael Metcalfe embraces the post-medium stridency manifest both in medieval art and movements such as Dada and Pop. Harkening even to the dawn of mankind’s need to make sense of his existence. Thus Metcalfe’s work incorporates the metallic pallet of a singular certain world-view projected in visceral brutality by cave-paintings and Flemish Primitives. However, Metcalfe melds this unified iconography of the distant past with our contemporary disparate icons scattered through the multi-media of popular culture. In this way Metcalfe’s work digs to the fundamental depths of human psychology that spans the ages. Consistent with the fusion of past and present, Metcalfe’s images are rendered in a reinvention of the ancient technique of decoupage. Bourgeois delicacy and precision are replaced with an industrial physicality, immediacy, chaos and sculptural dimension. The pure emotion evident at distant viewing becomes enriched and subverted on intimate inspection. Consequently, Metcalfe’s work not only reflects the human condition through horizontal time, but also its vertical complexity at every instant.